Regular Meeting
6:00 PM
Salmon River JSD #243 District
Detailed Agenda: http://go.boarddocs.com/id/salmon/Board.nsf/goto?open&id=CN63GX06DDA4
Interested parties, may submit views, present data or arguments, orally or in writing, in support of or in opposition to agenda items. Written statements should be directed to the District Clerk (Michelle Hollon at hollonm@jsd243.org) prior to noon the day of the Board Meeting. 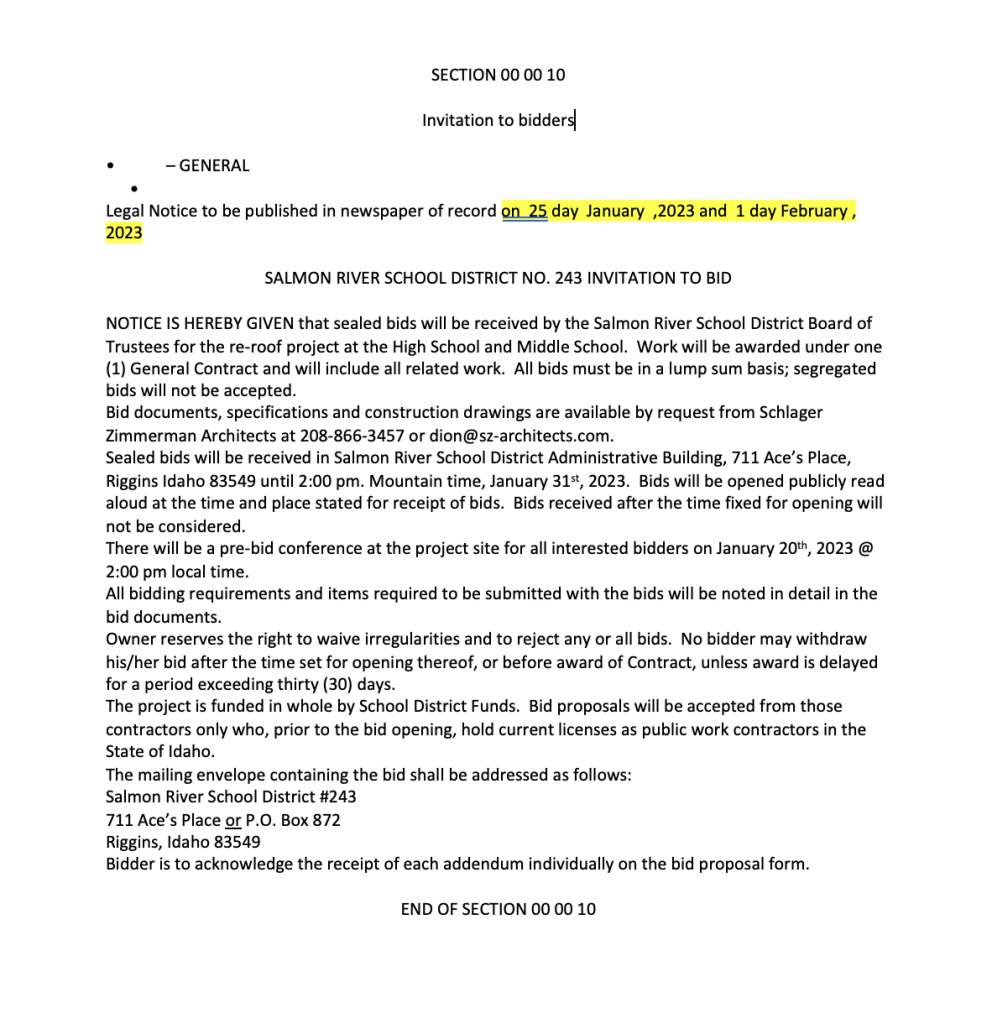 NOTICE IS HEREBY GIVEN that sealed bids will be received by the Salmon River School District Board of Trustees for the re-roof project at the High School and Middle School.  Work will be awarded under one (1) General Contract and will include all related work.  All bids must be in a lump sum basis; segregated bids will not be accepted.

Bid documents, specifications and construction drawings are available by request from Schlager Zimmerman Architects at 208-866-3457 or dion@sz-architects.com.

Sealed bids will be received in Salmon River School District Administrative Building, 711 Ace’s Place, Riggins Idaho 83549 until 2:00 pm. Mountain time, January 31st, 2023.  Bids will be opened publicly read aloud at the time and place stated for receipt of bids.  Bids received after the time fixed for opening will not be considered.

There will be a pre-bid conference at the project site for all interested bidders on January 20th, 2023 @ 2:00 pm local time.

All bidding requirements and items required to be submitted with the bids will be noted in detail in the bid documents.

Owner reserves the right to waive irregularities and to reject any or all bids.  No bidder may withdraw his/her bid after the time set for opening thereof, or before award of Contract, unless award is delayed for a period exceeding thirty (30) days.

The project is funded in whole by School District Funds.  Bid proposals will be accepted from those contractors only who, prior to the bid opening, hold current licenses as public work contractors in the State of Idaho.

The mailing envelope containing the bid shall be addressed as follows:

Bidder is to acknowledge the receipt of each addendum individually on the bid proposal form.

Due to the holiday, the regular board meeting will be held January 23, 2023 at 6:00pm. The agenda will be posted this week.

“From the Superintendent’s Desk” January Newsletter 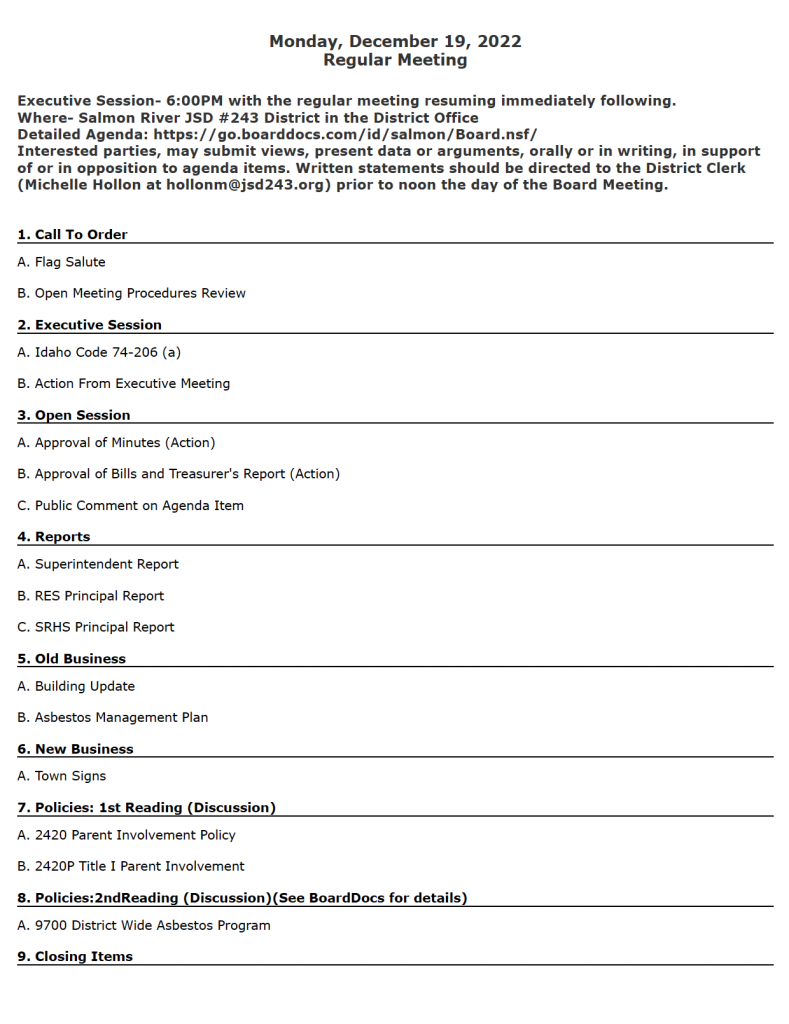 Please call the high school or elementary for any urgent matters.

Special Board Meeting
The Salmon River Joint School District will be holding a special board meeting for the purpose of a Title IX Appeal Committee meeting at 6:00pm in the District Office.
1. Call to Order
A. Flag Salute
B. Idaho Code 74-2069(a)
C. Executive Session
2. Open Session
A. Action From Executive Meeting
3. Closing Items
A. Public Comment on Agenda Items
B. Adjournment

Salmon River Joint School District #243 is looking for a Board member for Zone 3 (Riggins City Limits mainly).  To apply for a position on the School Board, you will need to submit a Letter of Application. You can mail, e-mail or deliver it to the District Office, located next to Salmon River Jr/Sr High School. Due to the Thanksgiving Holiday, the district office will be closed until November 28, 2022. However, you may leave a voice mail or email and we will get back to you as soon as possible.

More information and a link to the zone map can be found on our website https://jsd243.org/board-of-trustees/members-zones/

Regular Meeting
Regular Meeting 6:00Pm in the District Office
Salmon River JSD #243 District
Detailed Agenda: https://go.boarddocs.com/id/salmon/Board.nsf/
Interested parties, may submit views, present data or arguments, orally or in writing, in support of or in opposition to agenda items. Written statements should be directed to the District Clerk (Michelle Hollon at hollonm@jsd243.org) prior to noon the day of the Board Meeting.
1. Call To Order
A. Flag Salute
2. Executive Session
A. Idaho Code 74-206 (a)
B. Action From Executive Meeting
3. Open Session
A. Approval of Minutes (Action)
B. Approval of Bills and Treasurer’s Report (Action)
C. Public Comment- In reference to items discussed on this agenda.
4. Reports
A. Superintendent/RES Principal Report
B. SRHS Principal Report
5. Old Business
A. Main Building/Gym Update
B. Roofing
6. New Business
A. Title IX Appeal Committee
7. Policies: 1st Reading (Discussion)
A. District-Wide Asbestos Program
8. Policies:2ndReading (Discussion)(See BoardDocs for details)
A. Leaves of Absence Policy 5400
9. Closing Items
A. Public Comment-Public Statements about Idaho Statute
B. Board Member Input For Future Agenda